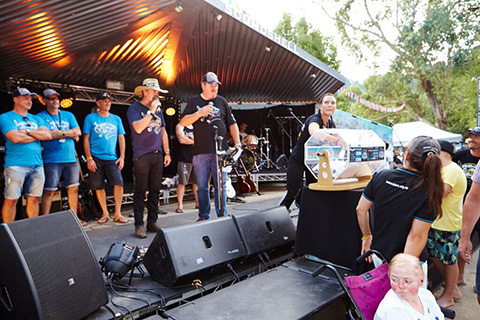 Well definitely brighter and most definitely bigger, the 2016 Brighter Days Festival is over for another year. With an estimated crowd of between 20-30 thousand for the weekend, this festival is now officially on the map. Proudly sponsored by Harley-Davidson Financial Services and H-Dtv, the annual Victorian Labour Day weekend in March was deemed a huge success.

Set in the beautiful scenic township of Bright, Victoria - a perfect venue for a festival such as ours, nestled at the bottom of Australia's premier ski fields Mt Hotham and Falls Creek, the roads and riding are to die for… mix that with some of Australia's best entertainers and musical acts, add a collection of amazing and collectable cars and hot rods and a shitload of Harley-Davidsons and you have a recipe for a great family event!

The Brighter Days Foundation was formed in 2012 by a bunch of keen bike and car enthusiasts who wanted to make a difference and chose to offer support to two charities; DebRA Australia and SUDC (Sudden Unexplained Death in Childhood). We had a mission to create a bike, car and music event catering to families and that is exactly what we’ve done. In just 4 years with no money spent on marketing the Brighter Days Festival has taken off and will now be a feature in Harley-Davidson’s yearly calendar. With support from Harley-Davidson Australia, Asia Pacific and H-D Financial Services, plus ongoing exposure from the ever-popular HARLEY DAVIDSON TV, the momentum is astonishing with a massive turnout for the 2016 event.

What is even more astonishing is to have so many people in one place, dancing, riding, driving & partying in amongst families and large groups who don't know each other and not have a sniff of trouble. Well behaved doesn't even cut it, it was inspirational considering the family Moomba event in Melbourne had a heap of trouble the very same weekend. The Brighter Days Festival dispels any myth that bikers and trouble go hand in hand.... not so!

Okay, if you weren’t there, then here's what happened...

Friday kicked off the Festival with over 200 bikes and cars entered in The Cottonball Run from Whittlesea, north of Melbourne to Bright, about a 4-hour ride with lunch on the way. The Whitfield Road from Mansfield to Whitfield and then through the King Valley to Bright is not only spectacular but also built for motorbikes. If you haven't ridden it then put it on your list. The Tolmie Tavern is worth a quick stop - a real biker watering hole in middle of nowhere.

The Cotton Ball Run is named after the DebRA kids who suffer the skin disease called Epidermolysis Bullosa (EB). This is a rare, painful disease where the skin blisters and peels at the slightest touch. Sufferers must be wrapped in cotton wool to protect their wounds. Money raised from Brighter Days has assisted DebRA with many items including wheel chairs, ramps, specially made clothing, shoes, air conditioners, medical equipment and supplies. Brighter Days has also contributed to the EB Nurse Program, which employs dedicated part-time EB nurses in VIC, QLD and NSW. DebRA receives no direct government funding and there is no cure.

Once the run hit Bright the party started out the front of the Alpine Hotel and merchandise started walking out the door. A large range of T-shirt and caps etc all sold out over weekend, which was unreal.

Saturday morning and few showers soon turned into a very hot Saturday. The Make it, Bake it, Grow it Market was in full swing down by the river as The Cooper Card Run revved up. This is a poker run on steroids for bikes, cars and people. At each stop if you don't like the card you've been dealt you can buy another, and another, and another...! The best hand wins.

The Cooper Card Run is named after Cooper Trewin who tragically passed away at 16 months for no known reason. A pathologist told Cooper’s parents after an autopsy that they’d had a healthy little boy without sickness, injury or disease. That left a lot of unanswered questions so they decided to establish the Cooper Trewin Memorial SUDC Research Fund. Monies raised from Brighter Days have assisted in the development of a Neuroimaging Study being conducted at the Boston Children’s Hospital to help identify kids at risk.

After 4 stops and some great riding the pack of over 300 bikes and cars returned to Harley Central - a dedicated Harley zone behind the stage on the river. This place was buzzing with bike displays, vendors etc. Everyone kicked back, bought tickets in the MEGA Harley-Davidson raffle (1st prize: Customised Breakout - 2nd Prize: Street 500) and got ready to party. Live music on the river stage, circus performers for the kids and the headline acts of Daryl Braithwaite and Ross Wilson played to a massive crowd Saturday night, all keen bike and car families. Saturday really was a Brighter Day.

Sunday morning and it was The Amazing Chase for our energetic teams of four, while it was all go for the Car Shown n’ Shine in the Main Street and the Bike Show n’ Shine at Harley Central. The babes were all organized of course and The Babes Brunch was a sell out weeks before… Great turnout for all events. As it turns out the bike that won Best in Show, a 1966 Shovel Head was bought a week later by Geelong Harley's Col Jones. It's a beautiful original machine and will look good in GHD collection.

Sunday afternoon saw the trophies handed out and H-Dtv’s Screamin’ Eagles kicked into action on the River Stage. Always entertaining and great muso’s (the boys will be playing at Harley Days in Wollongong in October so make sure you're there).

Sunday night closed with a massive crowd again watching Bjorn Again - the no 1 ABBA tribute act in the world. These guys were booked for the girls and the mums, but we saw plenty of blokes in vests singing along to Dancing Queen!

Highlights of Sunday night were the moving videos and speeches from families of both charities…you could have heard a pin drop…Out went the donation buckets! With messages from Nigel Keogh, MD Harley-Davidson Australia and NZ and Marc McAllister, MD Harley-Davidson Asia Pacific the MEGA raffle bikes were drawn. 1st Prize winner was from WA and 2nd Prize winner was in the crowd. The winner of the Kincrome 3rd prize donated his prize back and the auctions began…

With all entertainment at the festival free and no pressure to donate we are very proud to have recently presented our cheques worth $210,000 to our charities at the Brighter Days Festival Thank You Party held at a great Victorian bike and car pub, St Andrew’s Hotel. An unbelievable result for the weekend.

So if you were there, good on you for going and if you weren't, then get there next year!

Big thanks again to Adam Wright, Nigel Keogh and Marc McAllister and the whole Harley team including Kim, Marcus and the boys. Harley Central will be bigger again next year.

Thanks for supporting Brighter Days.
See you on the road...